Coventry is a city in central England. It’s known for the medieval Coventry Cathedral, which was left in ruins after a WWII bombing. A 20th-century replacement, with abstract stained glass, stands beside it. The collection at the Herbert Art Gallery & Museum includes paintings of local heroine Lady Godiva. A statue of her, naked on horseback, is nearby.

Lady Godiva is an English noblewoman who, according to a legend dating at least to the 13th century, rode naked covered only in her long hair through the streets of Coventry to gain a remission of the oppressive taxation that her husband imposed on his tenants. 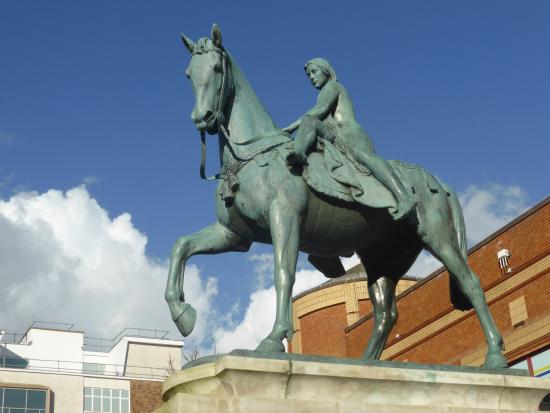 Coventry Transport Museum houses the largest publicly owned collection of British vehicles in the world and tells the fascinating story of Coventry and its people through the rise and fall of its biggest industry. Now fully reopen after a £9.5m redevelopment programme, this huge museum offers a whole day out of fun and discovery for visitors of all ages.

Celebrated as the UK’s favourite 20th Century building, Coventry Cathedral is known all over the world as an icon of peace and a truly stunning venue. Designed by architect Sir Basil Spence following the bombing of the city in 1940, the New Cathedral was opened in 1962 and contains some of the finest examples of the 1950s and 60’s Art and Architecture in the country.

The Great West Window, carrying reflections of the ruined cathedral next door. Some of the original stained glass in the bombed-out cathedral can still be seen in the reflections. The main panels having been removed at the outbreak of WWII.

This is the third Coventry Cathedral, the first destroyed by King Henry VIII, the second destroyed by Hitler’s bombers. Designed by Sir Basil Spence, started in 1956 and consecrated in 1962.

A grade 1 listed building and one of the 20th centuries finest British buildings. The entire cathedral is an artwork and contains many more artworks, most donated from around the world as symbols of peace and reconciliation.

The new cathedral stands next to the bombed-out ruins of the former cathedral, which remain preserved as a memorial to the hundreds that died in the mass bombing of Coventry on 14th November 1940.